In recent years, there’s been a shift towards healthier lifestyle choices, like following a healthy diet and exercising on a regular basis.

Things like eating a balanced diet that’s rich in nutrients, including more fruits and vegetables, as well as exercising more often, can increase happiness, as well as having health benefits.

The study used data from over 4,000 UK households in the “Understanding Society Data” study. This included questions about the participants’ lifestyles and general habits, such as their diet, sleeping patterns, mental health, and exercise routines.

Then, they used this data to analyze how habits might impact moods and mental health. The results show that, overall, following a healthier lifestyle is linked to more happiness.

In particular, those that ate enough fruits and vegetables and followed a consistent exercise routine were most likely to experience improved mental wellbeing.

How to stick to a healthy routine

One of the findings of this study was that the researchers found that self-control was a key indicator in whether or not someone will maintain a healthy lifestyle.

Those with the highest level of self-control were most likely to stick to their healthy habits. However, for those finding it more difficult, the researchers had other recommendations.

For example, understanding the long-term benefits of healthy habits and prioritizing them made the participants much more likely to stick to them, and this also made them happier.

Another option for anyone struggling was to have a plan and strategies to stick to the habits in the long run, like behavioral nudges to reinforce objectives. This can be very helpful in maintaining a healthy lifestyle, which makes people both happier and healthier.

How many steps should you walk a day to stay healthy?

Enquirer 360 — 7 March 2022 add comment
Staying active is incredibly important for both your mental and physical health. It helps you live longer, reduces the risk of many diseases, and improves overall happiness and wellbeing.  Walking is one... Read more » 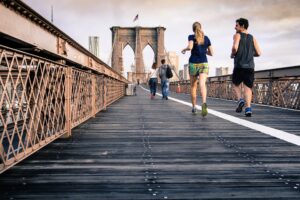 The benefits of regular exercise for depression-related symptoms

Linda Conrad — 10 August 2021 add comment
Exercise has many health benefits, including preventing illnesses and making it easier to lose weight. Now, a new study has found it may help relieve some symptoms of depression.   In a new... Read more »

Linda Conrad — 7 December 2020 add comment
Eating healthily can cut the risk of an array of health conditions. It can also improve your mental health, which is an essential for many people in these troubling times.  If you... Read more »